This is a demo of Vivid Spirit; An indie title in the works since late 2014. This download contains a Normal Stage for you to freely play through. Play as Vivid, a colorless girl on the outside but with a heart that would make a rainbow jealous. Or swap to her doggie friend, Spirit, whose speed and abilities will take you on an incredible ride.

Vivid Spirit is an action-packed platformer where your color dictates how you interact with certain objects or attack. You will need to manage your color to effectively take out targets, platform, puzzle solve, or discover new areas. Charge up your weapons for great damage, collect Energy to use Power Pins to heal, speed up or blast away all foes in an area!

After nearly two years of hard work and no big demo updates, I FINALLY have a new demo with all sorts of new things to show! If you've played before then, this is a huge change. All visuals have been replaced with Traditional art! Updates to weapons, physics, level design, etc. The core game is still there, but heavily improved upon.

This is "Vivid Spirit", the new title the game will go by from now on. We'll have an update in the future that includes new music as well. For now, this is the 2.0 Vivid demo. We'll be looking for bugs currently before more happens.

A lot of things are in need of change, still need to update screenshots, videos, etc. One thing at a time, there is much work that needs to happen!

May need a DirectX download to utilize shaders for some computers

What a wonderful demo. It feels like you took some of the best parts of kirby levels and made it into a fun game. There's a lot of thought put into the switching mechanic and to make each weapon feel very fun kudos.

I don't have any gripes at the moment other than some weapons are inherently easier to use than others (the axe taking some used to) and it being daunting on some players all the switching and mechanics. There's a lot in there, especially in the upgrades, that may need to be explained.

Thanks! There is definitely a lot to take in, so I plan on making something to ease players into it in the full game.  It's kinda the downside of doing a demo for a game like this, ya kinda got to put in some of the more interesting mechanics in it without the stuff that'll ease the player into it that a full version could(Which is why I made a short tutorial just in case). But this is not a game I expect everyone to get or fully know the mechanics of for the first few levels, beyond Color Swapping, attacking, and some platforming.

I really like the artstyle and I feel like the different abilities at Vivid's disposal are simple to use but have  a lot of versatility. I got stuck on the beaver part with the axes on the second wall you have to scale that also has normal blocks. Regardless, I've really enjoyed playing the demo and I'm going to try to play through it again later.

Thanks for playing! That's an optional side room to test out the Ax's Wall Scaling abilities. It's just a matter of figuring out where and how to scale the Blue Blocks or walljumping.

I played the demo and I really liked it. All the characters are cute and well designed with a sketchy drawn to life art style.

The controls take some getting used too (especially with a low-end intel processor), but overall are fine. I used a gamepad for my play through and noticed that the analog sensitivity was high. Vivid would sometimes slowly inch her way across the room even after letting go of the joystick. A way to adjust this in the options menu would be nice.

I'll be following the development of Vivid, looking forward to the final product. Keep up the good work.

Slow inch? I'm not sure how that would happen. The sensitivity shouldn't cause that, you have to move the analog stick a ways before she starts moving. With the exception of checking for any other controllers players might want to use besides the first one detected, I'm covered in terms of input controls. I'll look into it though, thanks. 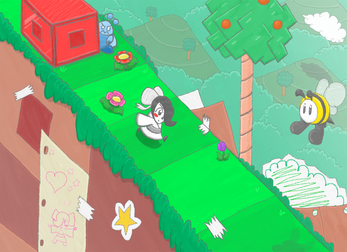 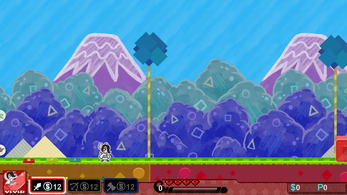 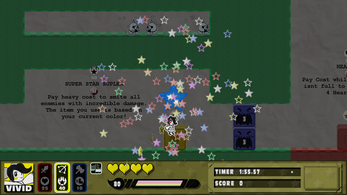 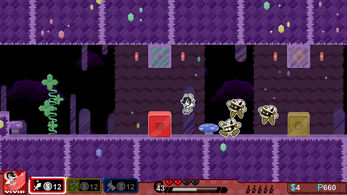 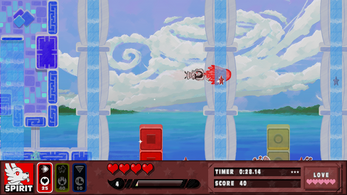